A Texas family with Nebraska roots is joining forces with an innovative Husker program to ensure more of Nebraska’s most talented students succeed in college.

Beginning in 2018, the Trenchard Foundation, established by Husker alumnus Bob Trenchard in memory of his late wife, Barbara, and his late sons, Todd and Trey, will provide scholarships for Nebraska College Preparatory Academy graduates to attend the University of Nebraska-Lincoln. 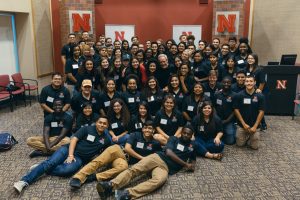 “Our desire is to help kids who are bright and want to go to college but can’t afford to,” said Bob Trenchard, an El Paso-based attorney.

Trenchard and his current wife, Norma, said they have been impressed by the academy’s comprehensive approach of starting in high school to teach outstanding first-generation and low-income students the skills they will need to thrive in college and beyond.

The gift marks the start of a long-term relationship between the academy and the Trenchard family. The Trenchards have pledged significant bequests from their estates to the University of Nebraska Foundation and also plan to donate the assets of their foundation.

Officials familiar with the planned gifts say they amount to the largest donation to the Nebraska College Preparatory Academy since the university established the program in 2006. Omaha’s Sherwood Foundation gave $2.5 million last year that expanded the academy to serve four high schools, from the previous two.

“This gift is unique because it’s not just about the scholarships, it’s about the relationships we will have and will hope to gain with the Trenchard family,” said academy founder Amber Williams, assistant vice chancellor for academic services and enrollment management.

Currently 99 academy graduates attend the university. Last year’s expansion could double that number. All 30 scholars who successfully completed the high school program in 2017 started college this fall, 28 of them at Nebraska.

The Trenchards’ support will help the academy fulfill its financial promise to students who complete the rigorous high school program. Scholars receive assistance to cover the cost of college, including tuition, books, room and board, and fees.

Bob Trenchard, who grew up in Holdrege, Neb., earned a bachelor’s degree in philosophy from the University of Nebraska in 1969 and a law degree from the University of Texas in 1972. He established a successful practice representing Permian Basin oilfield workers in personal injury and wrongful death lawsuits. He was named a Texas “Super Lawyer” by “Texas Monthly”  magazine in 2003, which reported he had probably handled more oilfield accident cases involving serious injury or death than any other lawyer at the time.

The Trenchard Foundation was first established to fund scholarships after Barbara Trenchard’s death in 2004. In 2016, the name was changed to The Trenchard Foundation to memorialize Bob’s sons, Trey Trenchard, who died that year, and his brother, Todd Trenchard, who died in 2011. Since its inception, the family foundation has awarded 32 scholarships to outstanding students in the Permian Basin in need of college financial assistance.

Bob’s wife, Norma, and daughter, Jill Trenchard, the foundation’s vice president, have been part of the family’s scholarship efforts.

Norma Trenchard, a first-generation American who grew up in New Mexico, didn’t learn English until she was about seven years old.

“My family always told me you’re going to go to school, you’re going to have to do better than us. We don’t want you struggling like this,” she said. “Hope is spread through people, through spirit. We provide a means, which is it’s easy to give money, but the result of that is hope.”

Trenchard said the recent deaths of his sons led him and his family to re-evaluate their legacy.

“When somebody dies who is close to you, it makes you realize that things are transitory,” he said.  “I see this as a chance to help kids who are more at risk and to maybe do even more good than what we were doing before – and I trust the University of Nebraska to keep it going.”

While cost is a major impediment to low-income students, money is not enough to assure success, Williams said. The academy provides academic, social, and college preparation through three pillars of excellence: knowledge, character, and commitment. Students in the program receive counseling and support, leadership building and personal development throughout high school and college. Students who go on to the university become part of the Institute of Excellence, which provides continuing support and guidance as scholars adapt to college life.

“Our model is different. Our model is: ‘You’re a scholar. You’re a leader. You’re our future,’” Williams said. “The students work really, really hard, but we provide individualized academic and social resources to help them be successful.”

Donate to the Trenchard Foundation securely through PayPal by clicking the button below: