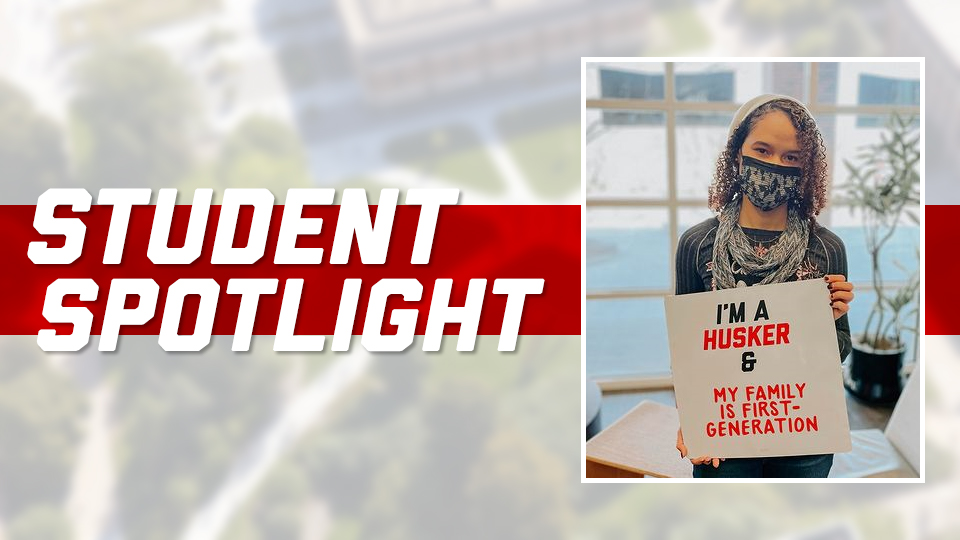 Nayla’s education is a major milestone—but not just for her. As the oldest in her family, she has little sisters who look up to her, and as a first-generation American and first-generation college student, she knows that her experiences can inspire others who come from similar backgrounds.

After moving to the U.S. from Cuba at age 10, Nayla quickly adapted to her new life in Grand Island and eventually became a part of the Nebraska College Preparatory Academy (NCPA). There, she was able to form a community of fellow future Huskers who would support her as she worked her way toward college. As a first-year student in the Honors Program, she still leans on her NCPA family and considers the program’s office a second home on campus.

NCPA connected Nayla to college, and now she’s using her education to help others. This fall, Nayla voiced Spanish translations of campus news for radio broadcast spots during Husker football games. While she doesn’t see herself stepping behind the microphone and becoming a full-time broadcaster one day, she was excited to have the opportunity to create accessible content for Spanish-speaking people across Nebraska.

“I am thankful that they did that, because it shows that they are interested in others and trying to include everybody,” Nayla said.

Nayla is also using her experience as a Husker to show other Latina women that college is something they can do. When she’s in her residence hall or in classrooms on campus, she often looks around and doesn’t see many people who look like her—but that doesn’t stop Nayla. She hopes that one day her much younger sisters will be able to look to her as an example and know that if she can thrive in higher education then they can, too.

“I am pretty proud of who I am and who I will become, but it’s also like, I don’t need to try to conform to other people,” Nayla said. “I just need to teach them how to treat me just like I let them teach me how to treat them. If everybody was the same, the world will be really boring, and there would be no transaction of knowledge.”

See the original article posted on the UNIVERSITY of NEBRASKA–LINCOLN website here.

Donate to the Trenchard Foundation securely through PayPal by clicking the button below: